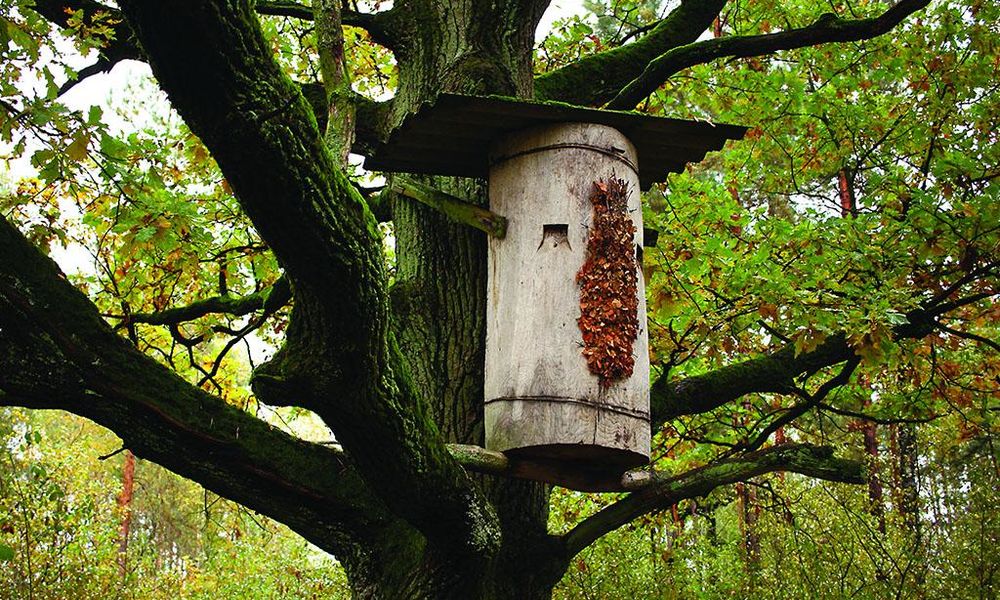 Wild-hive beekeeping is a traditional craft, an old form of forest beekeeping. Earlier the expressions "to look after bees", and “to keep an eye on bees" were used talking about this trade. First beekeepers got honey of wild bees, burning or smoking a swarm of bees out of the hollows of the trees. In the Middle Ages beekeepers made hives in tree trunks at a height of 4 – 15 meters. Honey and other beekeeping products were gathered twice a year. Already in the nineteenth century Polissya dense forest with its old trees was cut out massively, beehives-logs began to be made of cut trees and located them in trees in the woods or in the courtyards of rural estates. The manufacture of “borti” or beehive-log is connected with carpentry, blacksmithing, producing of woven from a skin or a hemp rope, tree climbing devices. Mysterious symbols that occur on beekeepers’ tools and devices are associated with ancient fundamental beliefs. Created in the form of an ornament that had magical content, they could be a form of ancient writing. A large number of prose retelling, calendar songs contain folk beliefs and ideas of a bee, the ritual meaning of honey and wax, which were used in family ceremonialism. It was also believed that a wild-hive beekeeper had magical knowledge that allowed him to collect more honey, protect hives with bees from thieves and stay uninjured during extreme climbs and descents from a tree.

In 40-50s of ХІХth century wild-hive beekeeping existed as a mass kind of rural trade in Polissia. It began to fall to decay due to massive deforestation, increasing importance of agriculture and the invention of frame beekeeping. Until the beginning of the twentieth century wild-hive beekeeping existed on the territory of northern districts of current Volyn, Rivne, Zhytomyr, Kyiv, Chernihiv oblasts. At present, the largest concentration of wild-hive beekeepers is in Rivne and Zhytomyr oblasts, in particular Sarnensky, Dubrovytsky, Bereznivsky, Rokytnivsky, Olevsky, Emilchynsky, Ovrutsky districts.

Modern wild-hive beekeepers get knowledge from their fathers or grandfathers by inheritance. Some people look for old-timers from other families within their own village, ask about the features of the trade, buy wild-hive beekeeping devices, and make new ones personally. As a rule, the process of transferring knowledge of wild-hive beekeeping takes place during the joint care of members of one family for bees in the spring or autumn. Basic requirements to a person who acquires the trade is a good physical form, lack of fear of height and bites of bees, and a desire to practice wild-hive beekeeping.

During the XXth century a number of studies on wild-hive beekeeping have been conducted, however, funding and organization of expeditions that would carry out a frontal survey of Polissya villages in Rivne and Zhytomyr oblasts are necessary.

Wild-hive beekeeping equipment, collected during ethnographic expeditions, is stored in collections of museums and stocks of Rivne, Zhytomyr, Kyiv, Chernobyl, Ivankov, Pereiaslav-Khmelnytsky. Local names of objects and artifacts related to the trade are registered. However, there is practically no audiovisual material that could reproduce the process of manufacturing these tools.

Information on wild-hive beekeeping in 1993 - 2017 was gathered by the Historical and Ethnographic expedition of the State Research Center of Protection of Cultural Heritage from Man-made Disasters. The video recording of various manifestations of wild-hive beekeeping was made by Oleksii Nahorniuk (ROKM), Volodymyr Khomenko, Anastasiia Pankova (NCNK Ivan Honchar Museum).

Distance from Kiev to Rivne by train: 393km

Distance from Kiev to Zhytomyr by train: 165 km