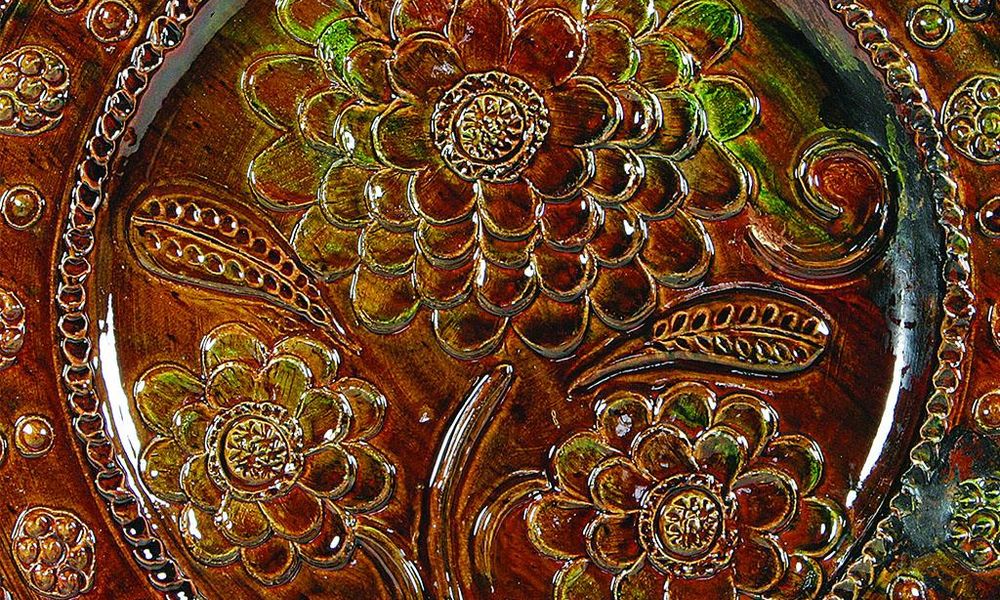 Opishnya decorative ceramics became the embodiment of long-time knowledge about the use of clay products in households and for ceremonial practices, the impersonation of aesthetic and artistic views of Ukrainians. Potters from Opishnya experimented boldly with shapes of products, glazes, ornamental motifs, producing elements for interior and exterior design of public buildings at the end of XIXth century. Shapes of Opishnya decorative ceramics of the late XIXth – XXth centuries are considered to be classic of Ukrainian pottery.

At the beginning of XXth century a new art tendency appeared in ornamentation of clay plates. Craftsmen started decorating with plant baroque ornament not only bowls, but other utensils as well. At the same time some innovations appeared in technique of decorating ceramics. In particular, traditional horn became uncomfortable, and potters started using a rubber syringe instead. A created line of ornamentation became thinner, and a craftsman got the opportunity to control its thickness and intensity of the leakage of paint. The identity of the decoration was defined by such traditional elements and motifs as «opuskannia», «poiasky», «kryvulky», «vyvidets», «reshitka», «palchyky», «nakapuvannia», «krapelky», «yabluchka», «klyntsi», «dorizhka», «lyshtva», «driapachka», «ovesets», «rebinchyky», «volochok» and others. These stylistic and technological changes identified specificities of Opishnya ceramics. They ensured its stable development and created demand for products in Ukraine and abroad.

The settlement of Opishnya is located in Zinkivsky district in Poltava oblast. There were 18 smaller pottery centres around it within the boundaries of modern Dykan and Zinkivsky districts. Local craftsmen created stylistically identical ceramics to Opishnya ceramics to the middle of the XXth century. However, to date, only two centres out of 18 still work – in Opishnya and in a neighbouring village, Mali Budischa.

At the beginning of the XXIst century the two largest pottery plants - Opishnya Plant of Decorative Ceramics and the Ceramics Factory – ceased to exist. Only two craftsmen out of all the potters who worked at the factories still do pottery. Instead, a young generation of artists (about 30 people) appeared, and pottery became their own business.

National museum – reserve of Ukrainian pottery carries out field ceramic expeditions for the museumification of pottery heritage. In the structure of the museum, the memorial estates of the potter, Oleksandra Seliuchenko, the family of potters, Poshyvailiv, and the philosopher and Opishnya ceramics collector, Leonid Smorzha, were created. The museum assists local craftsmen-potters in promoting their creation, organizing personal and group art exhibitions. The scientists have defended three Candidate’s thesis which are related to Opishnya ceramics. Several monographic studies were produced; a fundamental catalog of Opishnya bowls from the collection of the Russian Ethnographic Museum in St. Petersburg (Russia) has been published. State Specialized Art Boarding School I-III stages "Collegium of Art in Opishnya" named after Vasyl Krichevsky functions in Opishnya, where students from the first grade learn traditional Opishnya pottery.International Symposium of ceramics, International youth pottery festivals, International Art Fairs "Pottery Universe in Ukraine", National festivals of pottery, National exhibition – competition in art pottery "CeramPeak in Opishnya", National blacksmith festivals "VakulaFEST", National “Ceramic Graffiti Fest", National Festival and Competition of Pottery Body Painting are held annually. Besides, based on National museum – reserve of Ukrainian pottery, annual sessions of the E-Summer Academy of Pottery are organized. The main Poltava tourist routes pass through the village. Pottery and decorative ceramics have become a point of pride for local communities.

Opishnya is an urban village of Zinkivsky district in Poltava Oblast.